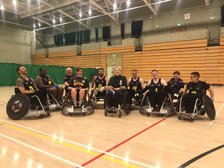 I'm glad that the sport's being recognised, that everybody has started to love it. The crowd have been outstanding all day.
Team Captain (Trish Duffy)

Crawley Jets Wheelchair Rugby Team remain undefeated in their second round of the summer WR5’s series tournament Sponsored by Crawley Rugby Club at the K2 Crawley leisure centre, Crawley on Saturday 30/04/2022 outstanding performance from the Crawley Jets So much blood, sweat, tears.

Crawley Jets now played a total of 7 games and won all 7. 100% clean sheet: can they hold on to become supreme champions in the 3 round of the WR5s Tournaments?

Christopher Middleton (The Destroyer) was going for it at full throttle, screaming into the faces of his team-mates as they geed themselves up for the crucial matches ahead. Chris spent the duration of the 2 games with a permanent scowl on his face, man-marking (well, ramming), and liberally doling out the death stares. The speed of players such as Kieran Green (Kick-Ass) one of the team’s highest-scoring players. He was a dominant offensive force, unstoppable on his way to the goal line. He certainly was unstoppable.

It was a special moment for The Jets youngest player Jack Hagan (15yrs) scoring in his first summer WR5s tournament goal against the Harlequins Jesters . A breathtaking performance with real passion from all of the team

The spectators seem to have gone crazy for the sport dubbed murder ball because of its high-tempo aggression think Mad Max with mascots. The Jets were the undisputed rock stars of the games, with tactics including tipping the opposition out of their wheelchairs. The crowd loved every minute of it, screaming their heads off all roaring for the home side.

The Jets are incredibly thankful to Crawley Rugby Club and would like to say a big thank you to all for your wonderful support from the staff, volunteers and coaches who give up so much time to give us the opportunities we have. THANK YOU JETS TEAM

At the end of the tournament the team posed for a photo with Kylie Grimes MBE (Harlequins Jesters Coach) Kylie 3x Paralympian. Tokyo 2020 GOLD Medalist

Paul Chapman (Coach for the team)

“Really proud of the Jets performances, lots of points to improve on, but the team played for each other and with a real passion that the other teams could not match. Many thanks to the supporters who came and watched a great afternoons sport”