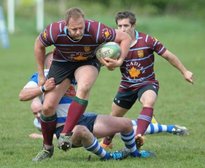 Crawley Miss Out On Successive Promotions

CRAWLEY missed out on successive promotions after suffering a 41-22 defeat to Hastings & Bexhill in their play-off game for a place in the London leagues.

It had been an educational path to the play off for Crawley, newly promoted into Sussex One this season there were not many that thought that an opportunity for another promotion would arise so quickly. With the way the side had progressed it was difficult to remember that for many it was their first ever season of senior rugby.

The match started at a high intensity with some ferocious tackles showing that neither was going to give an easy ride to their opposite number.

The visiting forwards took control of the ball initially and Crawley had to work very hard to get anything to play with, but from a mistake by Hastings the home back line streaked into action and penetrated the Hastings defences. An unforced error stopped this attack and gave the visitors a scrum and a good platform from which they were able to put the first points on the board with a break through the centres.

Crawley, undeterred by this early score, resumed their attack and within a few minutes a jinking run by Steve Wilson levelled the score as he broke several tackles on the way. This was to be the last action of this influential player as he left the field carrying a shoulder injury.

The visitors responded in the same manner, today was going to be end to end rugby, they built some phases with their forwards and pressured the Crawley line forcing an infringement, from a quick penalty and more pressure they broke the defences to again go in front.

The home side went straight back in similar style, Luke Wilson broke through and known as one of Crawley top scorers was certain to add point, but the visiting full back had other ideas and from a crunching tackle Luke too was forced to leave the field.

Twenty minutes gone and with Crawley now missing two key players, the resilience of the team was to be tested.

Back at the visitors posts Crawley kept up the pressure to force a penalty just five metres out, Josh Burt was unstoppable from here and the score was again levelled.

The game settled, Hastings trying to win the game with their forwards, Crawley through their back but with many unforced errors the play was sustained in the middle of the park. An early ball from a ruck and a snipping run entertained the crowd as Ben Searle weaved his way over sixty meters to be stopped just inches from the line. A clearance kick and chase put the visitors back to the other end catching Crawley on the hop allowing Hasting to score taking it to 14 – 19 at halftime.

From the restart it was the home teams turn to again pile on the pressure and after some cynical infringements the visitors found themselves with two players in the sin bin for ten minutes, a chance for Crawley to take control.

The chance was missed; some good defending by Hastings and perhaps some poor choices by Crawley saw the sin binned players return to the field with the home side only adding three points from a Matt Lane-Miller penalty.

Back to a full complement Hastings soon nullified the Crawley penalty points and a break through the centres was to again take them a score in front.

Crawley full back Matt Lane-Miller was quick to keep his side in touch with a counter attacking run out wide, it was looking like this enthralling game was going to be tight all the way to the final whistle.

The visitors continued to plug away through their forwards with the backs making the most of whatever opportunities they were presented with, a penalty in front of the post puts them a score clear, another break on the wing found the space to score a fifth try and their heads were now up.

A resolute Crawley worked had but they were now chasing the game, some unforced errors kept them from scoring on more than one foray into the visitors half. The pressure was kept on Hastings but a penalty gave them time to return to the Crawley line and one last score closed the game.

Battling to the end Crawley returned to the visitors try line, Hasting defence held strong, the referee blew the final whistle, the battle of Hastings was over.

Coach Steve Silver was proud of the squads’ achievements from the season and admitted that promotion two years in succession was a big task and not expected when the league campaign started. There are a lot of young players in the teams and another year older, another year wiser may see the promotion into London leagues a more viable step.

Thanks go out to all of the coaching team and support staff for their effort this season. As we now start looking towards next season it is important to also recognise the effort put in by the second team players as the maintained their presence in Sussex Two after also being promoted last year.

New players of all abilities are always welcomed and the only way forward it to encourage more players and their families to the club.